Our experience at the hotel wasn’t what we’d imagined it to be.

Have you read Part Two? You can catch up *here*.

I was mesmerized by the very tall slim man and troubled by the cry coming from upstairs. Equally pulled by both.

“What was that?” George demanded an answer from the newcomer.

The strangely dressed man made a motion of smoothing down his buttoned up embroidered waistcoat, with the palm and fingers of a hand, then took a considered glance at a watch hanging off it by a chain. “Don’t you mind about Mary.” He said, turning over the watch in between his fingers.

I couldn’t pull my stare away from the skilled manipulation: The fingers long and thin and white like bleached bones in the hot sun. Moving faster than well-oiled machinery.

“Why shouldn’t we be worried about Mary? The girl screamed!” George pressed.

“We used to call her Screaming Mary.” The stranger’s voice trailed away.

I sensed the whiff of glee about the man; his dark eyes burned with mischief, and his thin wide lips wouldn’t remain still, instead they twisted like a restless snake.

George looked at me. He still stood by the fireplace, and I was some twelve feet away, with a hand resting on the back of the chaise lounge. I was nearer the doorway and the man.

In that look I understood his concern for me, but also of that for the young woman I hadn’t met. Of course, he would put my wellbeing before a hundred Marys.

“Whatever poppycock is that! You ought to see to that poor girl now. She could be hurt.” George insisted.

“Oh, our Mary manages. She’ll be with you soon, Mr and Mrs Chester, to show you to your room.”

“What makes you think we’re staying?” George said, but by the time he reached mid-sentence the man had spirited himself away.

I looked to George and he looked at me.

What is going on?

“Mr and Mrs Chester,” A thin, barely audible voice, rasped, breaking the stillness. It was the same voice as before; the one that had drifted on the gust of the wind from the front door to  me. “let me show you to your room.”

I half expected a shrunken grey woman instead of the lovely looking girl before us. She wore long dark plaits down her front, a faded mushroom coloured dress to her calves, grey woollen socks and broken shoes that needed replacing. They were odd looking clothes. I assumed in keeping with the antiquity feel of the house? She had dark skin, full lips and heavily lashed brown eyes. Her figure was plump and her stature short; her face radiated softness. She seemed she wanted to be elsewhere.

“Nonsense!” George interrupted. He grabbed our bags and strode on ahead of me, quite forgetting I wouldn’t be able to keep up.

“Are you sure you are ok? We heard a scream.” George was asking her as they climbed the wooden staircase to the next floor, together.

I was unable to catch her reply, only noticed the subtle nod of her head.

We knew from the earlier telephone call that there would be one flight of stairs to our room. George didn’t like the idea, but I had insisted saying it was good for me to get the exercise where I could; that one lot of stairs wasn’t going to kill me.

However, at that moment in time, I was silently reprimanding myself: The stairs were old and steep, and the steps increasingly narrowed as we neared the top. I tightly held onto the wooden banister that was overly polished with the beeswax that permeated the air and made for a slippery grasp under my anxious fingers. I silently swore at George for abandoning me, like I was some trailing homeless dog.

When I reached the top – standing on thick midnight blue oriental carpets, and eyeing a pair of oak chairs with tall backs below a window – George and Mary had completely vanished. With annoyance mixed with gratitude for the chairs, I sat down.

Coming to Hotel Unicus was supposed to be an exciting adventure. Then, on second thoughts, perhaps it was; it just wasn’t the ‘exciting’ I had anticipated or wished for. I stared at the long hall ahead of me, the emerald green walls full of jostling paintings and aged photographs. The heat of the summer day, the long car drive, combined with the dust and the beeswax filled my senses. Lulled me to sleep.

“Maggie,” George was saying, standing by the only window in our hotel room. “you really should have a look at this.”

I was reclining on the double bed, with the inertia of not being able to move. Even if I could, I wasn’t willing to move my resting pained body. The only view I had out of the window was the top half which showed an expanse of cloudy but blue sky.

George made an odd clicking sound in the back of his throat. Something I’d never heard him do before.

“What George? What is it?” I pulled myself up into a sitting position and craned my neck.

Still transfixed on the happenings going on outside our window, my husband sighed.

“George, will you tell me what’s going on?”

“I’m not sure,” he answered, without turning. “they’ve taken the body away now.” 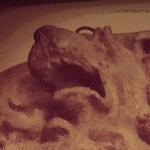 I wasn’t left long by myself, at the top of the stairs, slumbering on the high-backed oak chair. I fancied George’s fingers were gently stroking my face; in a downward stroke from my forehead to my temple. The caress was soft without being ticklish. But I slowly realised I didn’t remember George ever stroking my face like that. Not ever.

I opened my eyes and couldn’t help but scream at what I saw. 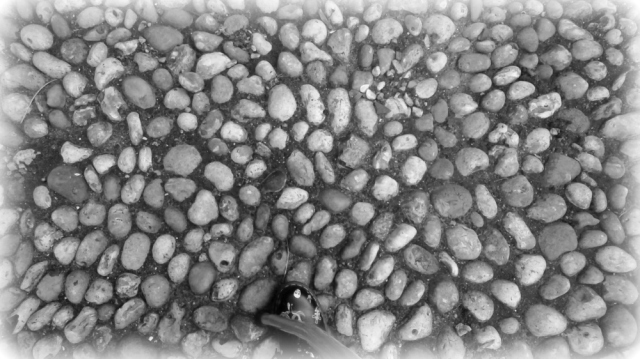 Photographs and digital manipulation by me, 3rd May 2016, Great Yarmouth Row Houses.

My day out at the Great Yarmouth Row Houses.

Writing prompt: Our experience at the hotel wasn’t what we’d imagined it to be.

Writing inspiration: A strange dream. And a little Hotel California.

What’s a Short Story Series?: A short story written over several parts, around 1,000 words for each part.

Story and artwork belongs to Faith McCord who is the author and artist holding the copyright. This is not a public domain work. Worldwide right

Hi, I'm Faith McCord, writer of the Oscar Dandelion books. I love reading, writing, watching films, looking at architecture and general design, embroidery (especially Elizabethan), spending time with my family. I used to enjoy long walks, bodybuilding, going out, however, since my injury my mobility is seriously impaired, so I'm more of a home-body now. I'm interested in meeting other indie / pro writers, so do say 'Hello' ! :)
View all posts by Oscar Dandelion →
This entry was posted in Short Story Series and tagged adventure, Faith McCord, fiction, free, ghost, horror, story, The Hotel Unicus. Bookmark the permalink.