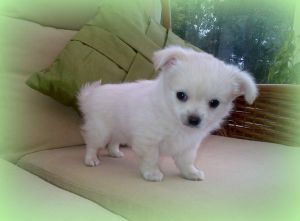 My puppy was about eight months old when I was suddenly taken with the idea to write about him. Then he was a fluffy white ball of whispy fluff – just like a dandelion head – and just like now, had / has a cheeky loveable disposition. He would take to mountaineering up my legs whilst I sat at the dinner table; skillfully getting a grip on each leg in turn, with his sharp clawks digging through trousers into flesh, escalating as quick as could be up into the safety of my lap. Whilst he was smaller this was amusing – but at two years of age and after the usual growth spurts, I’m trying to disuade him from this practice. Sometimes, I’m not joking, my legs are in bruises. However, that’s nothing on the severe chronic pain I experience every day…

You’ve probably guessed by now, I’m talking about the original Oscar Dandelion. (Will the Real Oscar Dandelion please stand up?) He was my Halloween pup: finally collected at eight weeks of age on the 31st of October 2013. I had waited an age for him. He may be small – Chihuahuas are the smallest breed of dog – but he’s huge on personality. As soon as he was physically in my life, I couldn’t stop talking about him.

Then he was a fluffy white ball of whispy fluff – just like a dandelion head.

I’m usually one for making up stories, especially silly ones. I like mixing things up – such as a carrot driving a tractor, then hailed as a traitor by the other vegetables etc. – which seems absurd at first, but then maybe there is some truth exposed through the madness? I like where those thoughts may lead. By turning things upside down, inside out, is fun in the making, and perhaps thought inducing. Seeing things in other ways. We take the ordinary in our every day stride, so taken up with the activity of our jobs, menial errands, tasks, families, we quite forget to blow the dandelion seeds. Life is too short to give up on Wonderment – remember that what you had whilst young and innocent, as you first explored this world of ours? 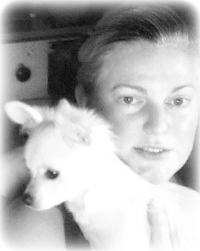 One day, at the table, with Oscar mountaineering up my legs, I suddenly said to Mum, “What about a story about Little Lord Oscar Dandelion? Living in a grand house, wearing fine embroidered waistcoats?” Or, something along those lines. Anyway, I’m always trying to make her laugh since my dad passed away five years ago. We laughed at the thought of our Oscar being a lord, flaunting designer waistcoats.

Now and again we referred to the idea of that story developing. It was fun, natural. “He has to wear crushed velvet waistcoats in dark green.” Mum said; “I think Dandelion Hall is a good name for his home.” Came another of her suggestions.

I suppose I had a vague recollection of the Little Lord Fautleroy story by Frances Hodgson Burnett. Published in 1886 – 129 years ago! – it tells the story of an American boy, Cedric Errol, having to move to England, to live with his grumpy grandfather after inheriting a fortune and the title of Lord. It’s a rather sentimental rags-to-riches piece, proving very popular at the time. According to Wikipedia , Cedric Errol was the Harry Potter of his day, spurring on sales of velvet suits with flouncy bows for boys – and even hairstyles of ringlet hair. Goodness. That makes me think of Oscar’s feathery, voluminous tail!

Besides this, I’ve always enjoyed stories of talking animals, whether that would be of the satire kind (Animal Farm by George Orwell), or stories written for the children’s market, such as: Stuart Little by E. B. White (a talking mouse), and the Beatrix Potter Tales, especially Peter Rabbit – did you know she actually had a house rabbit, called Peter, she walked on the lead?

But I also enjoyed Lillian Jackson Braun’s The Cat Who Could Read Backwards, although the two Siamese cats don’t actually talk. It was a dog(!)-eared copy given to me by an American woman of whose shop and home, in Germany, I cleaned. Yes, I love cats almost as much as dogs. She also gave me another cat type paperback, which I had been using as a doorstop to my bedroom. Unfortunately I never got to read it as Mum’s Yorkshire Terror dog peed on it.

And, of course I grew up on Anna Sewell’s Black Beauty. Published 1877. Reading it several times over and watching the t.v. adaptations. She had such empathy for the poor working horses; as you read the thoughts of Black Beauty you really feel for him. As I read the Wikipedia page I’m startled to find that she too became disabled to a mistreated injury (barely able to walk or stand). I already knew that Anna Sewell and I both share Great Yarmouth (Norfolk, England) as our place of birth.

More recently, I read (and laughed a lot) at Dial C For Chihuahua by Waverly Curtis. 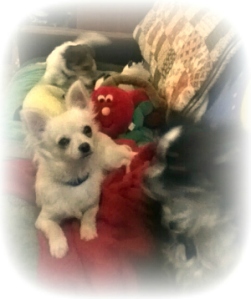 About my own book, Little Lord Oscar Dandelion ( International Jewel – and Sandwich Filling – Thief ) – Oscar really does steal sandwich fillings if you don’t watch out! – the more I talked about it with my life-partner, John, Mum and Sue (a friend I picked up in the supermarket whilst comparing mobility issues on our scooters in the veg section), the more the story took shape. And the more I itched to write it.

So there you have it, how I got to writing the book. I can honestly say, writing each page was a joy. It was the first thing I did when I awoke each day, sometimes at dawn. I hope you enjoy reading it.

Story and artwork belongs to Faith McCord who is the author and artist holding the copyright. This is not a public domain work. Worldwide rights.